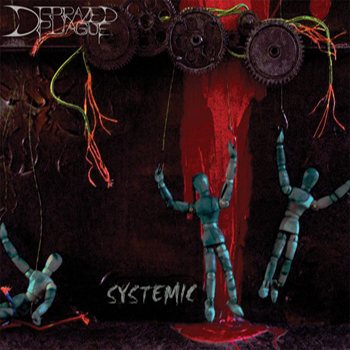 There used to be a time when British death metal bands sounded, you know, fucken British. The UK, the land of big fucken tits, is known for a lot of things, but good death metal is generally not among them. At least not in the last decade and a half or so. Depraved Plague (yeah, very original - was Abnormally Large Aureolas taken?) is yet another UK band sounding more like a particularly fucken retarded USDM band. It was also released on Contagion Records, which should have any fucken sensible person running to the hills. Next to surprising the world with the fucken shittastic Meat Train there's one more fucken signing on Contagion Records. Unlike the rest of you dumb fucks, I'm not holding my breath for it. "Systemic", despite its amateuristic layout, is actually pretty.... Uhm, decent? Not terribly fucken interesting, or anything - but decent, at least. There's a girl on bass guitar here too. You can even hear her fucken bass guitar. Yeah, like, for reals, and shit. Her name is Emma Davies, but I doubt she's related to the always very fucken naked Zoe Alexandra Davies - nor is her input as important as eternal goddess Jo Bench. We all need more Jo Bench in our lives. Just fucken saying. I'm not sure what the fuck to say about this other than this is yet another of those bands ripping off old Cannibal Corpse, or Suffocation. They are too necro, or stupid, to solo so don't hold your fucken breath to hear anything fucken interesting. They kinda remind me of that other stupid UK band Necrosis. Seriously, these two fucken bands should gig together as you can't tell their songs apart anyway. Usually there's a good reason when nobody wants to sign your stupid fucken band. A lot of times it is cos your piece of shit garage amateur hour fucken blows. Capiche? Anyway, so yeah, this record is out, and you can buy this shit if you still believe in that "support the underground" nonsense. It's bands like this that fucken killed the underground in the first place. Unlike the rest of you fucken assholes I have better stuff to do. Like getting insanely and obscenely drunk, or wondering how the Staceys (Poole and Massey) manage to walk upright. 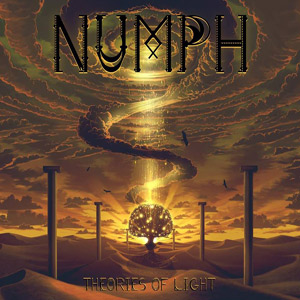 Usually Italian metal, especially the “progressive” and power variety, makes me fucken run to the hills faster than you can say “Sawa Suicide has really big fucken tits”. Point me towards a good Italian metal band (surprisingly they do exist. Hey Vera!) and I’ll point you towards five that are absolutely fucken dreadful. All humor aside, Nümph is from Italy too, and they don’t completely fucken blow. I know, I was as surprised as you fucken assholes were. The band consists of nobody you ever heard of, and they describe themselves as “progressive rock n roll”. They name Pink Floyd and Soundgarden as most important fucken influences, which is always a fucken win in my book. The Floyd is great, dudes. Check em out today. “Theories Of Light” is a really breezy, light record that is mostly about fucken atmosphere than actually being metal, and they weren’t lying about the fucken Floyd influence, cos this has David Gilmour written all over it. You can ever hear the bass guitar, and it has an absolutely godly tone. Holy fucken crap, dudes. Oh yeah, now I hear where that Soundgarden edge is supposed to come from, some of the riffing has that grungy Seattle feel, and the singer really tries his best to pass himself off as a brooding grunge singer. Not that I’m complaining. I’d rather listen to a grunge record than to sit through another of your “fucken sick, and completely br00dle” slam bands, asshat. I can’t really say there’s a ‘Black Hole Sun’ to be found on this record, but I’m giving that a pass, this record is fucken ace as it is. Nümph, what does that even mean? Is it supposed to mean anything? I prefer a nymph myself. I could listen to ‘Dust Of Souls’ for fucken eternity. This is why I like to listen to Café del Mar or Buddha Bar. That fucken opening is grand. Holy shit. Oh wait. Actually the entire record is like that, and ‘Death and Rebirth’ totally opens with a modern day U2 melody. I’m not even kidding. So yeah, you assholes get the point. This isn’t very heavy, or brutal – not that I care for such things. It does have two things, two things that most metal records in about every genre miss these fucken days: songs, and atmosphere! I don’t give a flying fuck how many notes you can play, or fast you can sweep-pick or how fucken long your retarded drummer can gravity-blast… All that means shit to me, certainly if you couldn’t write a decent song if your pathetic piece of shit life depended on it. Nümph can write songs, and they do. For fuck’s sake, I can’t get enough of this shit. Odin knows that that doesn’t happen too often around these parts. So yeah, I better enjoy it while it lasts. Fuck you!